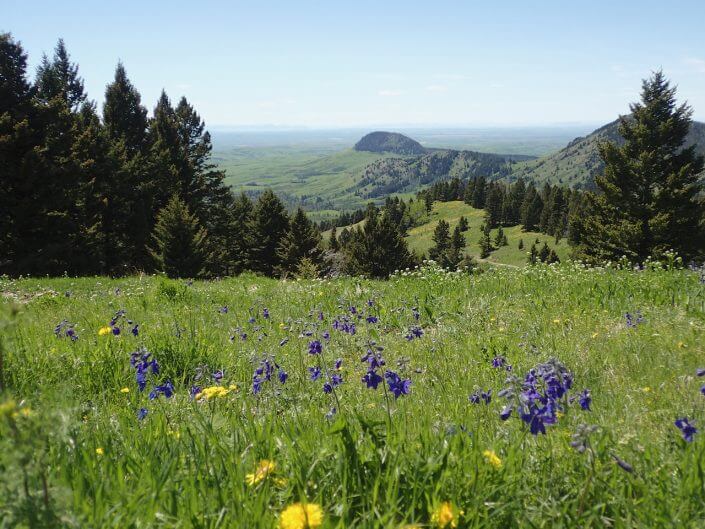 Soon after entering the national forest a sharp left turn at the highpoint on the road will access an old road/trail heading west and climbing to North Peak.  There is no water available after departing Upper Highwood Creek Road until Deer Creek Trail descends to the north side of Highwood Baldy.  Thet trail is distinct for approximately one mile until terminating at Two Fire Camp.  At this point various cattle trails veer off side-hilling the steep approach to North Peak.  Staying on the ridge and working up to obvious prominent natural cairn on ridge southeast of North Peak is the most expeditious route.

From North Peak exit the gate to southwest of peak and turn north to access the obvious ridge trail heading toward Section18’s high point on Highwood Baldy at 7670 feet.  The ridge hike north is a pleasant route with awesome views both west towards the city of Great Falls and east with views of the interior of the Highwood Mountains.  The trail intersects a steep gravel road to access the summit of Highwood Baldy where there are various communication structures.  Note good cellphone service is available from North Peak to Highwood Baldy summit and will not be available again until very close to section terminus at Highwood.  From this point until terminus the route is a descending mix of bushwhacking, trail hiking and finally a long county road walk into Highwood, Montana. Dropping steeply from Highwood Baldy the route crosses a couple moderately challenging scree and boulder fields generally heading north north-west to an obvious saddle above Deer Creek.  Descending into the Deer Creek drainage utilizing/crossing a myriad of cattle trails to access Deer Creek Trail (Trail 453).  Follow Deer Creek Trail east bound descending to Upper Highwood Creek Road where route turns north on road along Highwood Creek.  Exiting the National Forest there is no public land access and no camping areas until reaching Highwood. There is good water access along the majority of Upper Highwood Creek Road. Route turns directly north on Dunbar Road and descends to the town of Highwood.

The Highwood Mountains of Montana are a small, island mountain range located on the north end of the Helena Lewis and Clark National Forest. Geological history suggests that the Highwood Range is of volcanic origin. The Highwoods were once much larger, but over millions of years have been eroded to their current state. The hills are covered with pine and spruce forest and are a popular destination for hikers, mountain bikers, dirt bikers, and hunters.

Snow is usually not an issue for majority of summer season well into fall.

Water is plentiful along majority of this section except as noted above from North Peak to Highwood Baldy.

The majority of this section is on county/forest service roads.  A large portion of the route approaching, and exiting national forest is private land and requires owner’s permission to access.